Back to: Kino Flo FreeStyle LED 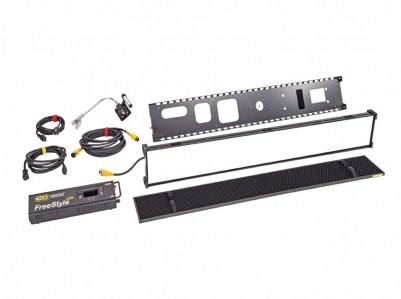 Features:
Ask a question about this product
Overview 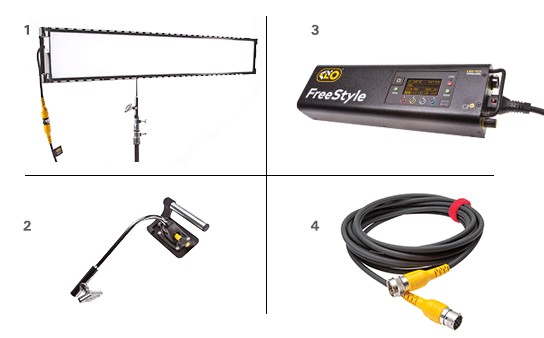 The FreeStyle 31GT LED Fixture is comprised of a Gaffer Tray, a removable LED panel and a 90° Honeycomb Louver. The Louver is held in place with Velcro and can give direction to the light or be removed to give broad coverage over an area. The LED panel can be removed from the Gaffer Tray by pressing the locking pin and turning the thumbscrew. The Gaffer Tray has a twist-on mating plate to accept a twist-on KinoGrip mount. The LED panel also has a twist-on mating plate to accept a removable twist-on mount and has molded corners for additional rigging options.

The Gaffer Tray holds the removable LED panel.  The KinoGrip center mount and the LED controller can be attached.  The tray allows for a smaller profile fixture without having the need to bend the plastic barndoors back.  When the mount and controller are removed, the tray can be screwed into the wall or ceiling through its screw points.

The FreeStyle 31GT LED fixture’s lightweight modular design includes a Gaffer Tray, a removable LED panel, a KinoGrip mount and a removable 90° louver. The Louver is held in place with Velcro fasners. The twist-on removable center mount can mount the fixture easily to a stand. When the mount is removed, the fixture is flat and can be hand-held or screwed to the wall or ceiling through its eyelets.

The removable LED panel also has a twist-on mating plate to accept the twist-on mount. The four molded corners offer additional rigging points for rope hanging, for example. With the removable KinoGrip mount, the fixture or LED panel can be hand-held. The FreeStyle 152 LED DMX Controller can also be strapped to the back of the fixture with Velcro or used remotely with an extension cable.

The FreeStyle LED controller can operate the Freestyle 21 fixture remotely with a 25ft extension cable or can drive the panel directly when mounted to the back of the fixture. The Freestyle controller (LED-152X), includes standard DMX in/out ports for cable as well as wireless DMX connectivity (Lumen Radio®). The controller features universal AC voltage input 100-240vac as well as a 3-Pin XLR for 24vdc operation.

The FreeStyle 152 LED DMX controller firmware is updatable from a PC using the Mini B USB data port. For the latest True Match Firmware update available, please contact us. A) On /Off: On = Green light displayed. Off = Red light displayed. The display and all menu settings can be operated while the power button is in the Off position, as long as power is applied to the controller. The On /Off button only controls the light source.

F) Mode: Press to navigate from Dim to Kelvin and G/M settings. When in sub-menus, pressing Mode always returns you to main display. When DMX is applied, use Mode to access DMX channel on main display. Shortcut: Long press will bring you back one step.

The FreeStyle LED DMX operates on universal AC power or battery power and needs only 0.65A at 230VAC or 6.25A at 24VDC. The FreeStyle LED’s cost savings from low energy and long LED life continues Kino Flo’s reputation as an environmentally friendly lighting company.

LED’s are well known as being energy efficient, lasting for thousands of hours. While Kino Flo’s FreeStyle LED also has a long LED life, the FreeStyle LED’s unique design will maintain its color-correct color temperature.

As with all Kino Flo products, the FreeStyle LED has been specially formulated to match the spectral distribution curves of today’s HD film and video equipment. The FreeStyle LED has high color rendering. Even while dimming, the fixture is flicker-free and without color shift.

In the Gels/Hue menu, the Kelvin range is extended to 2500K Kelvin to 9900K daylight and a fourth channel is called Gel. The Gel channel includes Kino Flo presets such as blue & green screen, sodium vapor, mercury vapor as well as over 100 well-known lighting gels. The gel function can be applied to any Kelvin temperature and by pushing the control knob in/out, the gel will be applied or removed. A fifth channel called Hue Angle (Hue) and sixth channel Saturation (Sat) are also included in the gel menu. These two channels behave similar to a traditional color wheel, where white light is in the center and Hue Angle determines the color along a 360-degree range and Saturation determines how much color is applied. With the Hue Angle and Saturation it is possible to create over 2 million color combinations!

The RGB color menu gives individual control of red, green and blue LED’s. The RGB mode is a great way to work with apps with predetermined RGB presets or color wheels. RGB menu is also a great feature to dial in specific gel RGB values or when controlling colors from a DMX desk.

The FX (Effects) menu introduced on June 1, 2018 provides access to popular effects such as Candle, Fire, TV, Police, Lightning, Paparazzi, Pulse and Scroll. When on the desired effect, there are several pre-sets as well as control parameters that can be altered. For example, in the Lightning effect there is a “Storm” and “Frankenstein” preset, but it is possible to change Rate to provide additional variation.

The CIE xy determines the color displayed by its X and Y space coordinates. For example, with a handheld color meter like the Sekonic C-800, users can obtain a CIE xy reading from any light source and input the CIE xy coordinates into the Kino Flo LED fixture to match colors closely.

Camera Profiles LUTs available for the following cinema cameras and more to follow: Panavsion DXL, Sony Venice, Arri Alexa, Panasonic Varicam. Kino Flo’s True Match® 4.0 firmware balances their LED lights to the cameras rather than the other way around. The Kino Flo designed tungsten and daylight LED emitters harmonize with the camera sensors even as the color temperature settings are adjusted.

The Color Space defines the RGB color space (white point and RGB primary colors) as a means of matching color points between manufacturing. Defining the color space takes the guesswork out of post-production workflow and color grading. Included in the are: rec 709/sRGB, P3 D65, rec 2020, and ESTA E1.54.

One of the design features of the FreeStyle LED Fixture is the twist-on removable Center Mount. When it's on, the fixture mounts easily to a light stand; when it's off, the fixture is flat and can be hand-held, or hidden in a space too small to place a stand-mounting fixture. When the mount is removed, the grommet holes along the edge of the fixture are designed to allow the fixture to be screwed onto a wall or ceiling through its eyelets. The remote Controller can also be attached to the back of the fixture with Velcro or operate remotely with an extension cable.

The FreeStyle removable LED panel also has its own mating plate to accept the twist-on mount plate. The LED panel can be hand-held with the KinoGrip mount and also has molded corners as rigging points for rope hanging, for example.

The standard mount comes with a KinoGrip Mount w/ Baby Receiver (MTP-BG41) that mounts onto a baby stand. The ball and socket mount allows the fixture to be oriented in a broad range of angles. With the KinoGrip, the lightweight fixture or removable LED panel can be hand-held.

There is also a short version and mount w/ 3/8" pin (see below) available as accessories. The yellow wire loops are there to provide attachment points for a safety chain.

Note: The lollipops on all of these mounts are interchangeable.

The Kino Offset w/ Baby Receiver, MTP-B41F can be used to center the weight and balance of the fixture on a stand.  It can also be under slung from a baby stand to use as an up light. 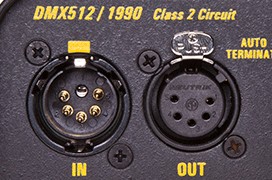 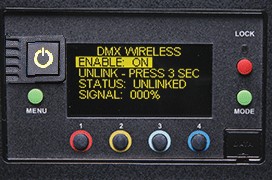 The FreeStyle 152 LED DMX Controller includes a built-in Lumen Radio receiver and can be operated wirelessly with a Lumen Radio transmitter (sold separately).  Wireless is an option to using DMX cables.  For more information on Lumen Radio Receiver/Transmitter, see www.lumenradio.com.