Directors of photography and students of cinematography, gaffers and production lighting technicians are invited to join with Kino Flo, John Barry/Panavision and RPS Lighting for a series of workshops on LED colorimetry for HD image capture.

Sydney: The March 20 workshop will be held at the Terrace Function Room, located within the Lane Cove Community Hub at 1 Pottery Lane, Lane Cove/Lower Ground Floor.

Melbourne: The March 23 workshop will be held at the Curzon Event Room, located within the Mercure North Hotel at the Corner of Flemington Road and Harker Street.

In Sydney and Melbourne, the first Color Science presentation will be held from 1:00 pm to 4:00 pm. The second two-hour session will follow around 5:00 pm.

At both venues, snacks and beverages will be served during the afternoon sessions, light refreshments available during a meet & greet gathering after the evening seminars.

“The color science of LED lighting is to cinematographers what natural pigments were to the old world art masters like Rembrandt and Vermeer,” according to Hochheim. “With a new camera Lookup Table feature and advanced gama controls, cinematographers can mix their own LED ‘dye, color and shading’ to control the look of the final image.” 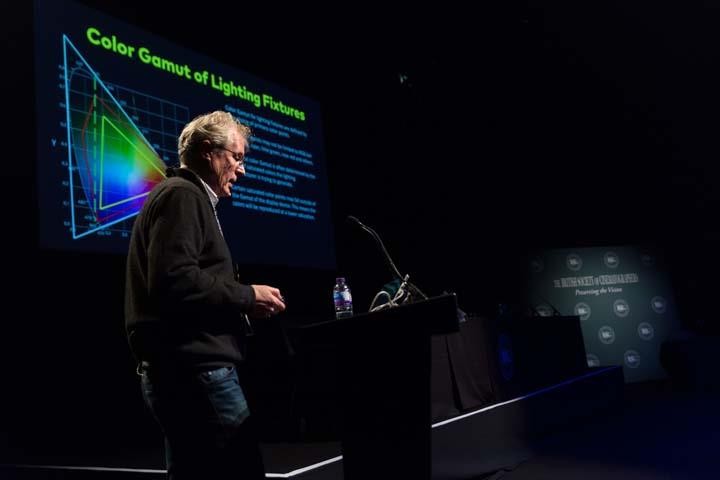 A discussion of spectral measurement indexes, both old and new, and how they relate to the reproduction of true white light for image capture. This subject includes a comparative report on the Color Rendering Index (CRI), the Television Lighting Consistency Index (TLCI), IES TM-30-15, and the Spectral Similarity Index (SSI).

Kino Flo’s development of a bias spectrometer for measuring the spectral response of lighting sources and camera light sensors as a basis for LED design and manufacturing.

Understanding white light and the color gamut. Some of the key areas of discussion include the importance of the Plankian Locus, a section covering Response Curves, such as Photopic (or Eye) curves and HD camera curves. An in-depth meditation on “Understanding Color Gamut”.

Differences in the white light color spectrum as recorded by HD technology.

The challenge(s) of matching white light and RGB color produced by luminaires from different lighting manufacturers.

With the new LUT and Gamut control features, Kino Flo takes another step in pioneering a new generation of broad spectrum LED softlights and pushing the color space to new artistic levels. The presentations will demonstrate the value of color science when used with the following four cinema cameras:

Attendees will also have an opportunity to work with Kino Flo’s most recent collection of LED FreeStyle Panels, FreeStyle Tube Systems, Celeb, Image, Diva-Lite fixtures and systems during this segment. Kino Flo will also debut during the Sydney event a new LED fixture planned for release later in 2019. 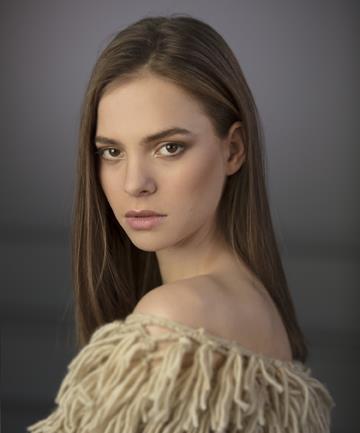 Since developing a color science department for its True Match® tubes in the 1980’s, Kino Flo has been at the forefront of LED design and manufacturing, creating a color correct, color stable line of tungsten and daylight LED emitters. The company has maintained color quality for more than three decades of fluorescent and LED design, across all product models. From film to digital cinema cameras, to other color critical industries such as smart phone calibrationand art restoration studios, Kino Flo is recognized for unrivaled color management. 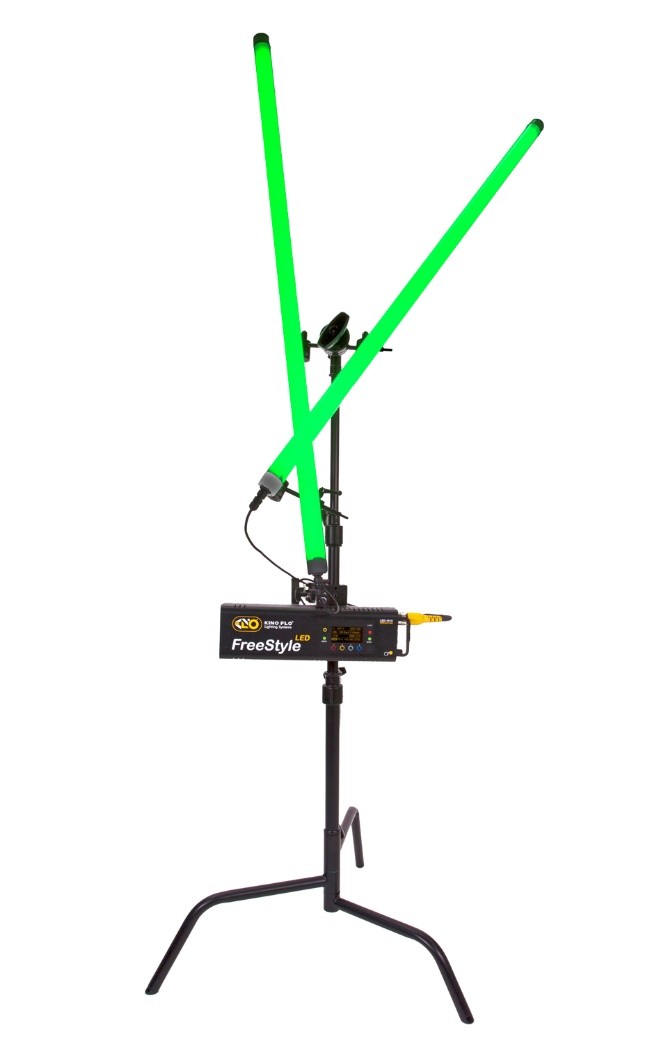 On camera, FreeStyle LED tubes photograph with the same softness, the same subtle color reproduction as Kino Flo’s award-winning T12 high-output lamps. In addition to the >96 photo rendering index, cinematographers will see the difference the 310° LED tube
makes when operated in a fixture or out of the fixture as a remote “sabre” of light.

Paired with a 4Bank fixture’s light intensifying reflector, the tube projects soft light forward at a 100° beam angle at about the same light levels you’d get from a 1,000W tungsten softlight.

Outside its fixture, a bare tube glows like a traditional Kino Flo lamp, with light radiating on all sides. The lightweight tubes can be taped to a set wall, customized to form arrays in soft boxes or hung as “ladders” of light for illuminating stage backdrops. A narrow aluminum rail built into each LED lamp expands the mounting options for special lighting designs.

“We have reproduced the soft light quality of our T12 legacy fluorescents,” said company president, Frieder Hochheim. “And we have added the durability and versatility of our own RGBWW (5-emitter) LED’s to the equation. The result is a new technical and artistic dimension to our product line, and something different from anything we’ve seen before in our industry.”

NAB attendees flocked to the Kino Flo exhibit for a first-hand look at prototypes and to play with the wide range of light control features: White Light mode, with Green/Magenta selection; Cinema Gel mode, with 115 industry standard filter colors, and a full Hue & Saturation color system; RGB mode; and a soon to be released, Visual Effects mode, boasting easy to use flash and strobe programs such as simulated “Candle Light”, “TV Flicker”, “Police”, “Paparazzi” and more.

Kino Flo Lighting Systems is ramping up retrofits of its legacy fluorescent Image fixtures to repurpose them as Image LED fixtures starting this June. Repurposing the legacy Image studio series products makes it easy and affordable for customers to transition their used inventory to the latest Kino Flo LED technology that comes standard on the company’s Celeb, FreeStyle and Diva-Lite LED lights. “Over the past few years there has been growing interest in repurposing fixtures from fluorescent technology to LED designs,” according to Kino Flo President and Founder, Frieder Hochheim. “Kino Flo is proud to launch the LED conversion program during Cine Gear Expo 2018, in Hollywood, June 1-2. Kino Flo will show off repurposed Image fixtures at Booth 125B, on the New York Street back lot stage.”

Kino Flo supplies pre-assembled, 5-emitter LED panels along with a specially designed “LED control cover” with all the electronics and controls built in. The new LED cover will replace the existing Image 85/87 or Image 45/47 covers, and will conform to ETL, CE and AUNZ electrical standards.

True Match 3.0 transforms Kino Flo LED’s into Candle, Fire, TV, Police, Lightning, Paparazzi, Pulse and Scroll effects simulators with the press of a button. Each special effects mode comes with a choice of FX types. Lightning, for example, has “Storm” and “Frankenstein”. The Storm effect is modeled on the rate and amplitude of thunderstorm strikes, and Frankenstein displays brighter, more cinematic light flashes. There is also rate control, and a cue feature using the power button.

Kino Flo has taken its time coding intuitive, hands-on software that’s like having an FX lighting console built into every LED controller. Presets in the TV setting, for example, are the result of hours measuring light and color variations on TV monitors throughout a programming day. In TV “Sports” setting, the lighting effect is bias in cooler, deeper saturated blues and greens, and the light variation simulates outdoor sporting action, such as football or rugby events. The TV mode also comes with “Movie” and “Music Video” pre-programmed lighting scenarios.

All eight of the FX modes have four memory buttons to store custom lighting effects, for a total of 32 FX presets.

“We wanted to take some of the same lighting effects that board operators program remotely for motion picture or television productions and make the effects accessible onboard our Celeb, FreeStyle and Diva-Lite LED products” said Frieder Hochheim, president and founder of Kino Flo Lighting Systems. “We will continue to add features like FX lighting to our LED lighting systems to ensure customers’ Kino Flo lighting tools stay sharp".

Following are settings and customizing tools on the other six FX modes:

The default frequency setting on Kino Flo LED controllers is 30kHz, which generally is flicker free for most productions shooting onHD or film cameras up to 240 frames per second. However, with the new firmware, the frequency can be dialed up to 300kHz when shooting at higher frame rates and shutter speeds.

For clear, stable DMX wireless reception, Kino Flo LED’s come with two built in antennae. With TrueMatch 3.0, users can manually select the smaller, internal #1 PCB (printed circuit board) antenna, or elect to stay with the #2 EXT (external) antenna, the more powerful of the two antennae.

New mode features within the General Menu allow users to translate RGB values to Hue & Saturation values, and to make other settings changes that take effect only after exiting the General Menu.

Kino Flo has refined further its LED dimming and color controls. Already the leader in smooth, flicker free dimming systems, the new firmware profile ensures color compatibility from fixture to fixture even when light levels vary widely. The industry has been asking for LED fixtures with a consistent, controlled dimming curve that doesn’t affect the color saturation when moving between 100% and 1% light output. The latest firmware update to the Kino Flo line of fixtures ensures a superior level of consistency.